A Community With Roots...

Famous for its natural beauty, Delaware Twp. has attracted travelers for over 200 years.

Whether you're visiting or a current resident, we invite you to browse our site and discover all Delaware Twp. has to offer.

A Community With Roots...

Famous for its natural beauty, Delaware Twp. has attracted travelers for over 200 years.

Whether you're visiting or a current resident, we invite you to browse our site and discover all Delaware Twp. has to offer. 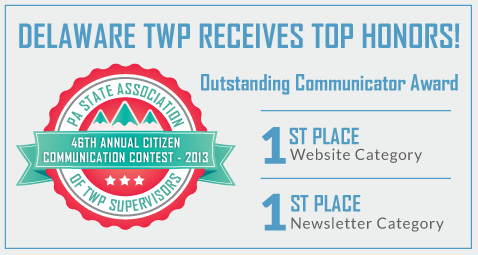 For Email Marketing you can trust

DINGMANS FERRY -- Delaware Township supervisors unanimously approved at their bi-monthly board meeting a $5,000 donation to Bushkill Emergency Corps that provides backup ambulance and medical services to township residents. It came after a lengthy discussion during the workshop held before the meeting about the Delaware Township Volunteer Ambulance Corps and other medical first responder services elsewhere that serve the township.
The donation is half of what was given a year ago because of a 50 percent reduction in emergency calls to Bushkill from a year ago, said Supervisor Jane Neufeld. At this point, Bushkill Emergency Corps answered the call from the Monroe County Control Center for 90 calls, compared to 180 out of the 520 overall dispatches a year ago. Neufeld explained that, with the threat of COVID-19, many residents suffering health issues called their primary doctors for medical care first, rather than for the ambulance.
Resident Steve McBride launched the discussion when he asked about donations given to the township ambulance corps, noting that there has been a $50,000 yearly line item on the General Fund, which Neufeld said is covered on the half-mill charged residents on their taxes. She said donation amounts have varied over recent years, based on specific needs shown by the ambulance corps.
DTVAC was invited to the last budget workshop held on Oct. 14 after the regular meeting but did not attend. Supervisors in the past have expressed dismay about not receiving complete requested data of the corps' finances.
"It seemed to me enough time has gone by by and resolving issues is no further along from a year or two ago," McBride said.
Emergency Management Coordinator George Beodecker asked and was told Bushkill Emergency Corps is a volunteer group. It provides Advanced Life Support as well as Basic Life Support services. Beodeker pointed out that about another 11 to 12 percent of the dispatches went to the neighboring Dingman Township Volunteer Fire Company's ambulance service when the township ambulance service was unavailable because of its limited hours of service and availability.
"We're compromising our mission here. It's a very convoluted system," said Beodeker of the networking setup.
Neufeld said after the meeting that volunteerism for ambulance corps, which has been a growing problem over the years, was a mixed situation: Some volunteers were more available when their companies temporarily shut down their regular jobs at the height of the coronavirus but, on the other hand, some of the older volunteers left their service for fear they would be more vulnerable to the virus than other people.
Resident Dennis Lee said a local group informed him that it was looking into offering round-the-clock countywide service with six ambulances for about $540,000 yearly. "I'd like to see that, " said Neufeld skeptically.
Lee said each of the 13 townships would enact a half-mill on its taxes to cover the cost, which the county could enforce, and donate that tax collection to the service. Supervisors expressed doubt that would be done.
But McBride said, "I can't see why 13 townships can't come up with the same style of formula that tax people and contribute to some sort of effort. If they don't pay, they opt out," McBride said, which he later said was a joking comment.
Supervisors all 13 townships would not participate, as Lackawaxen Township has its own ambulance corps with a 3.5 to 4 mills tax rate to pay for it. She said Palmyra Township and Hemlock Farms also have their own services.
"It can't happen," said Neufeld of the donations. "They (some townships) have other resources."
Supervisors said afterward they will further examine the idea.
They also approved the annual donation to Holy Trinity Food Pantry for $2,500, the same as last year, with much of those funds going to its Thanksgiving drive to help families in need.

Myck Road grant application filed
Also at the meeting, supervisors adopted a resolution to file a Pennsylvania Department of Transportation Multimodal Transportation Fund grant for $732,981.25 to fulfill the second phase of the Myck Road project. If approved, the grant includes a 30 percent match from the township to be used for improvements on Doolan and Park roads.

"We're keeping our fingers and toes crossed," said Neufeld.
Supervisors agreed to advertise bid specifications for bridge repair projects for Park Road and Log & Twig Road on Nov. 5. Pre-bid meetings will be held around mid-November and contractors' questions are due by 4:30 p.m. on Nov.20. Bids will be opened and publicly read during the Dec. 2 regular meeting.
Board of Supervisors Chairman John Henderson said the work involves "minor repairs and maintenance" to meet state inspection requirements.
Also approved was renewing the TruGreen contract for 2021 to treat township athletic fields for $5,986.06.
They approved the township fire police to provide traffic control for the Dec. 12 Christmas holiday event at Akenac Park.
Supervisors unanimously approved installing underground wiring for Cabin 21 at Akenac Park for $8,300 by Amp Electric Contracting LLC of Dingmans Ferry. Trenching, backfilling and reseeding is not included. The wiring leading directly to the cabin will remain above ground but be moved to another pole from a Met-Ed pole where it is illegally positioned.
The township renewed the Highmark Blue Cross Blue Shield health insurance policy for township employees, with no increase for the third straight year.
The supervisors have rescheduled their bi-monthly meetings to earlier dates rather than the customary second and fourth Wednesdays because of holidays at the end of the month. They meet again Wednesday this week and on Nov. 18 as well as Dec. 2 and 16. A final budget workshop will be held after the Nov. 18 regular meeting.
Neufeld, the township treasurer, said work on the 2021 township budget has "almost everything pretty well in hand. No tax increase," she said.
Supervisors held off any action on the Blue Ridge Cable Agreement after discussion during an executive session before the workshop, saying they need more information. They also tabled to the next meeting the issue of filling a Deputy Emergency Management Coordinator position.